Here’s Why Aeration Is Super-Duper Important

The other day, while I was catching up with a pub-pal of mine, I was met with one of the blankest expressions ever witnessed with human eyes. All I had done was tell this friend of mine she should consider, “a little less conversation, a little more aeration, please”. Seriously. I can’t tell you how blank her face went at the word aeration. It was like looking at the cover of A Clockwork Orange all over again. That’s how blankly she looked at me, for about six minutes, mouth slightly agape, only blinking every sixty-seconds. All of which made the majority of our catch-up pretty awkward. And I couldn’t understand why.

But then, as I was walking home, earphones in and listening Tom Jones’ “Green, Green Grass of Home” – my favourite lawn-based tune of all time. I was struck down by a thought that hadn’t occurred to me before: the Average Joe probably doesn’t have the same healthy obsession with lawns as this Joe does (“this Joe” being me).

Then I remembered the rest of our pub-chat about aeration, which went like this:

Me: “Come on, you should let me aerate your lawn?”

Me: “Because it’s important?”

It was like when you were a child and your parents would tell you to do something, and when you questioned their reasons they would just hit you with the classic, “because I said so.” Which doesn’t validate their point of view whatsoever. Well, I had done the exact same thing.

So, in an attempt to redeem myself (and send this blog as a sort of apology letter to my friend), here’s why lawn aeration is so important: 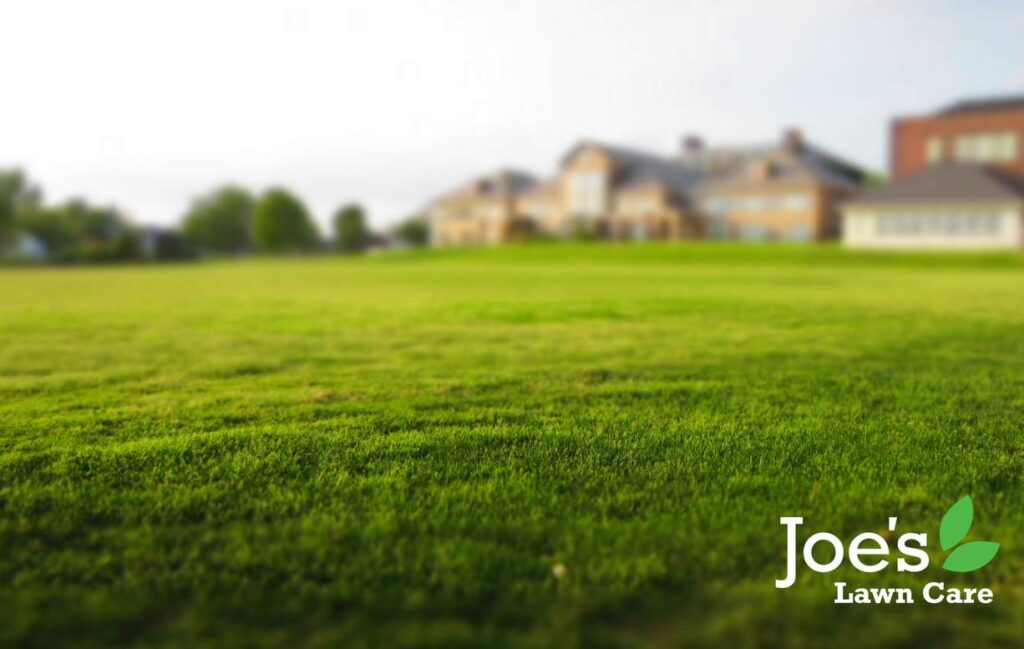 The Principle Of A Healthy Lawn.

In order for your lawn to survive and thrive, your turf needs to be plenty porous. Which was my grandfather’s semi-pretentious way of saying, “it needs lots of holes”, enough to allow oxygen, water, and nutrients to get through the top layers and start penetrating the root zone. If you don’t do this, your lawn runs the risk of becoming too compacted or developing a dense layer of thatch. Both of which can – and will – prevent said oxygen, water and nutrients from getting down to the roots. Ya, dig? 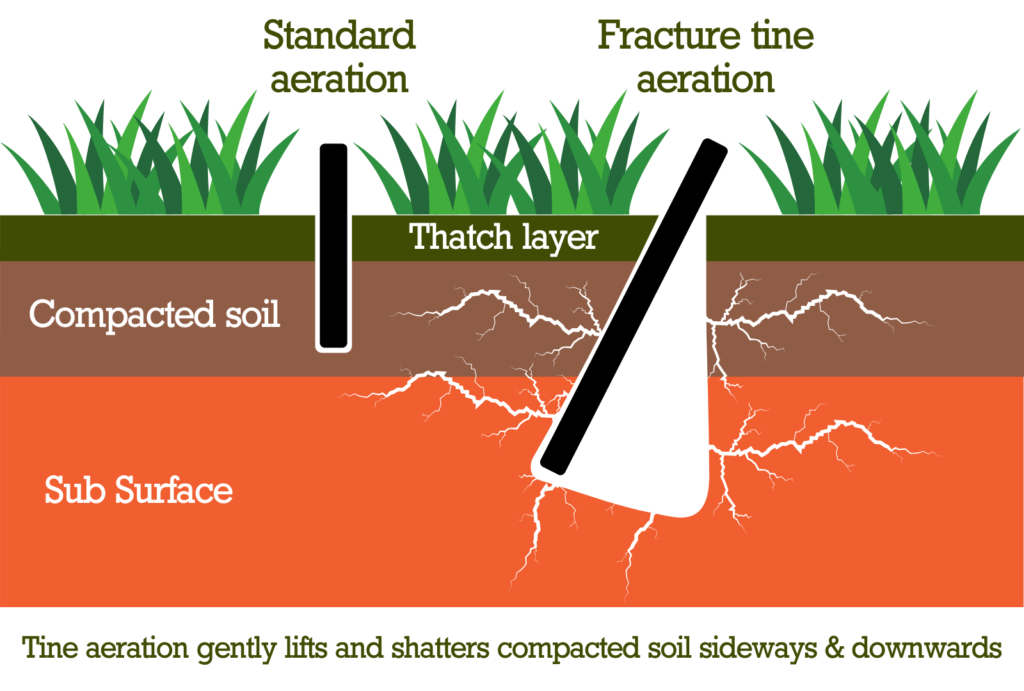 How Aeration Helps… A Lot.

For those looking for the most basic definition, aeration is just the process of stabbing hundreds and thousands of little holes in your lawn. A process that helps break up the soil and perforate it in a way that allows air, water and nutrients to get down to the roots, relieving thatch build-up and creating a deep root system as it goes.

(If, however, you were hoping for a more M&S Food-style, sexy definition of aeration and how it helps. Then clear your thoughts, envisage Nigella Lawson, put on your most sultry voice and read the following out loud. Aeration is the evolution of beauty through cuspidation, a perfect plethora of delicate chambers adorning your lawn like the detailed guild on a glorious crown. A process that allows the elixir of life to gently trickle down to your turf’s taste buds and trip the light fantastic. Sounds good, huh? Well it is.)

The Different Methods Of Aeration

Nothing makes me smile more than choice. It’s going to a restaurant and seeing a long list of melt-in-my-mouth options. Or heading to the cinema and seeing that my fiancé was fibbing about The Notebook being the only thing on. Or opening up the snack cupboard to see a plethora of unhealthy treats adorning the shelves. And the same goes for aerating, in which there are several ways it can be done, although core aeration is definitely the best.

Fracture Tine Aeration is the process of making deep and straight cuts cracking the soil allowing air, water and nutrients to penetrate to the root zone. No cores are removed, so no waste needs to be collected.

This is where a motorised machine uses its hollow fork-prong-thingys (also known as tines) to remove small cylinders of turf from the ground. Leaving lots of little-ish holes all over your lawn. Think of these holes as VIP entrances that have been reserved for Mr Nutrients, Donna Air, and Miss Water. Anyway, after you’ve had your lawn core aerated, you can either leave the little turf plugs lying about, in which they’ll get ground up and worn down when you mow your lawn. Or you can get you rake out and your sweat on – it’s your call. Oh, and you can now go ahead and topdress your lawn with loam, compost or whatever soil amendments you prefer.

Think of this as identical to core aeration, except no core is removed, which kind of makes it nothing like core aeration. Basically, it just makes a hole by pressing cylinders of turf down instead of removing them, although this does make top-dressing and overseeding considerably less effective. Nonetheless, the surface of your lawn will be penetrated and so air, water and nutrients will be able to circulate way more easily, while it will help loosen any compacted soil too.

If you’re like me in that you’re tall, dark and handsome… Kidding! What I meant to say was, if you’re like me and so lazy, you count gardening as your weekly workout. Then you’ll be pleased to hear you can get aerators that you can push. Hollow or solid, these relatively archaic machines have tines mounted on a drum which you push forward, poking holes in your lawn as you go.

If you were a Luddite in a former life, and I think I was. Then you can do away with aeration technology altogether and achieve a similar result by stabbing holes in your lawn. Try with something like a pitchfork, a garden fork, your partner’s comb, your golf shoes, or you could even invite Wolverine over now that he’s retired. So long as you have a tool with relatively long spikes, you can set to and aerate.

Given there is an electric car floating around space, is it so hard to believe you can get a foot-operated core aeration tool that you use. Sort of like a shovel, except it removes hollow plugs every time you step on it? Sure, it’s a little bit sweat-inducing, and you might want to download a few episodes of Desert Island Discs before you begin, especially if you have a decent dollop of lawn to cover. But if you have a small lawn and you’re serious about keeping it in great nick, you should get into the habit of aerating the most compacted areas after each mowing session. It will make your lawn great again. 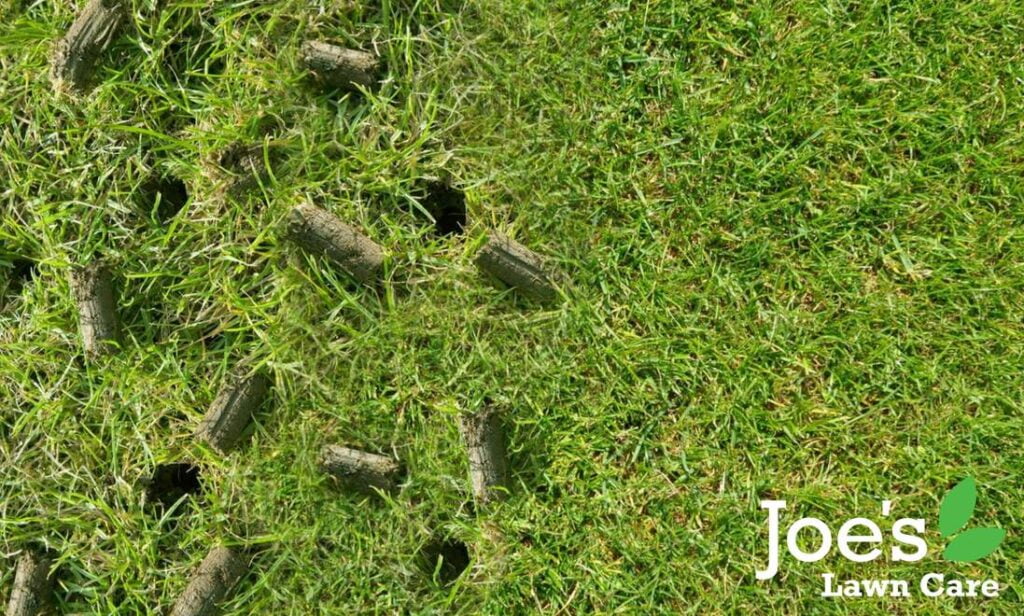 How Often Should You Aerate?

The short answer is: more than you are.

I know that’s a bit of an overarching statement that throws the Keen Kevin’s in with the Lazy Larry’s. But, from my experience, people don’t aerate often enough. This is sometimes because they see it as a hassle, which is pretty much what I’m here for. But it’s usually because garden-owners don’t like seeing a bunch of good-for-nothing plugs lounging around on their lawn. They think it’s unattractive. But what they don’t realise is a) how quickly these plugs decompose and disappear, and b) just how good they are for your lawn. In fact, aeration in general does nothing but good things for a lawn.

Don’t panic your little nerves, though. This isn’t something you need to do week in week out, or even every month for that matter. Exactly how often you aerate your lawn will depend on the type of soil you’re working with and what kind of climate you live in, but, on the whole (whatever that phrase means), we recommend you aerate your lawn twice a year, either side of summer – once in the spring and once in the autumn. At least. It could be that you live in a hot, dry place (such as the UK circa 2018). In which case you may want to consider doing the aeration dance a few times each year; spring, summer and autumn. But even that isn’t too strenuous, is it?